Halloween season is here and we’ve already started taking advantage of local opportunities for candy and fun. Friday night we attended a community street festival that encouraged kids to wear their costumes and collect candy from different vendors. We’re doing Toy Story family costumes this year for our theme and the kids’ costumes were a big hit! Now let’s hope our adult Toy Story Halloween costumes turn out to be just as popular.

Keep reading to find out where to buy the kid’s Toy Story costumes and how we made my Bo Peep costume and Hub’s Woody costume from mostly thrifted or borrowed items. Note that I wrote this several years before Toy Story 4 came out and have updated parted of the post to give you more options!

On Halloween night we added a friend’s dachshund to our group picture so you could say we even had a Slinky Dog, right? 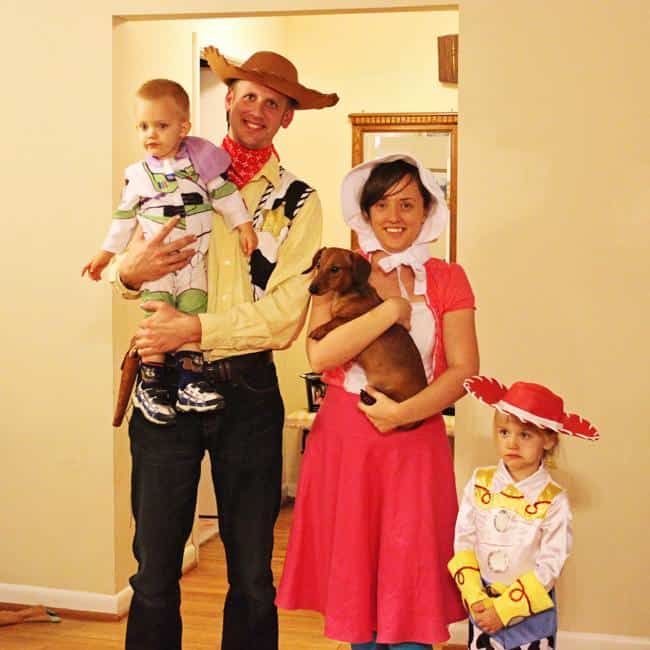 But maybe not quite as big a hit as Slinky Dog. Ha! 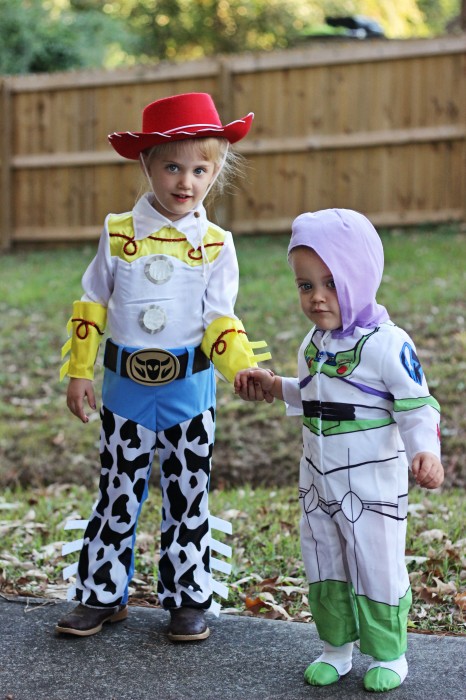 *Update on Sweet T’s Jessie Costume. While she loved it and it looked absolutely adorable, it did not last more than a couple of months past Halloween before there was a rip in the side seam. She wore it heavily for pretend play so maybe that’s just to be expected with low-cost, mass-market costumes but if your child is really into Jessie and going to be playing in her costume long after Halloween, you might want to pick a handmade option on Etsy or DIY your own Jessie costume. The hat has lasted nearly 5 years though so I’ll say that for it!

Sweet T will have plenty of opportunities to wear her Jessie costume between preschool, community activities and Halloween itself. Good thing since she’s in love with it. I have to put it out of her reach when she isn’t wearing it so it will stay clean and whole until October 31st. 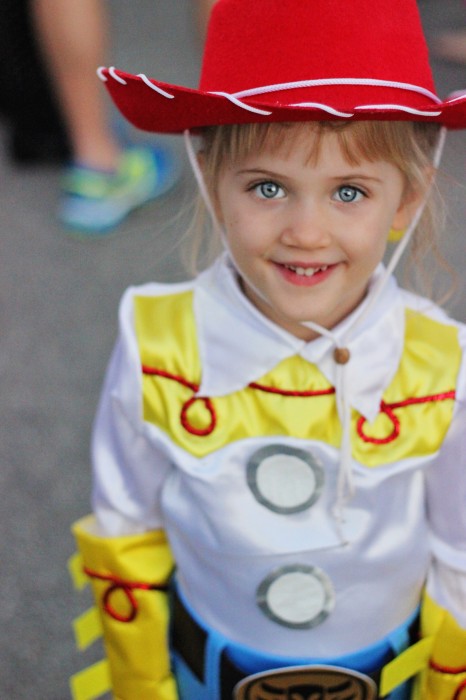 She got loads of attention in her Jessie costume last Friday night, and would grin and glow each time someone said, “Hey, Jessie!” Her Jessie costume is also flexible enough to allow her to dance in the streets. 😉 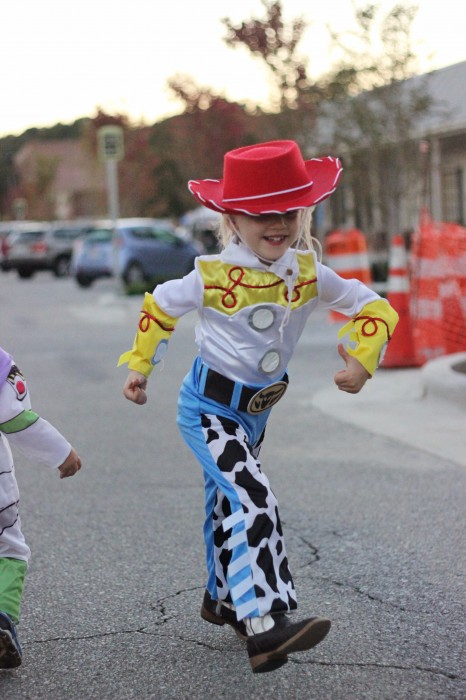 Gus is a tiny guy and only wears size  12-18 months even though he just turned 2. The Buzz Lightyear costume booties only stayed on for the picture and we had to switch him to tennis shoes since his feet are a little bigger than an 18-month-old’s even though his body isn’t. 😉 I like that this costume is simple and comfortable for our squirmy 2 year old who won’t tolerate something more elaborate. 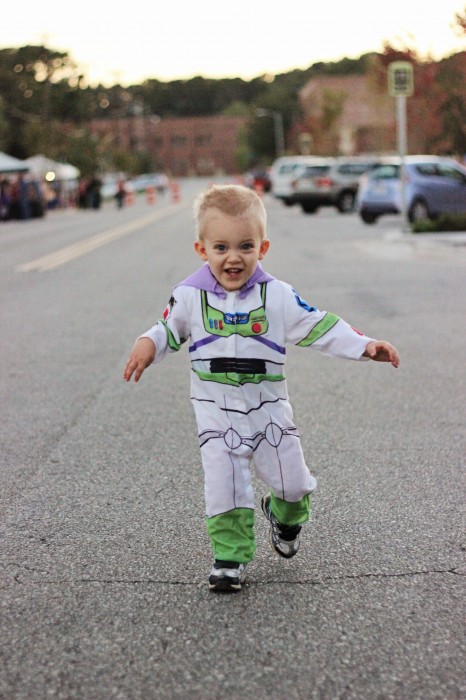 His Buzz Lightyear costume also has snaps up the legs for diaper changes. Good thing because you know he’s going to wait until we’re a mile from our car before filling his diaper. 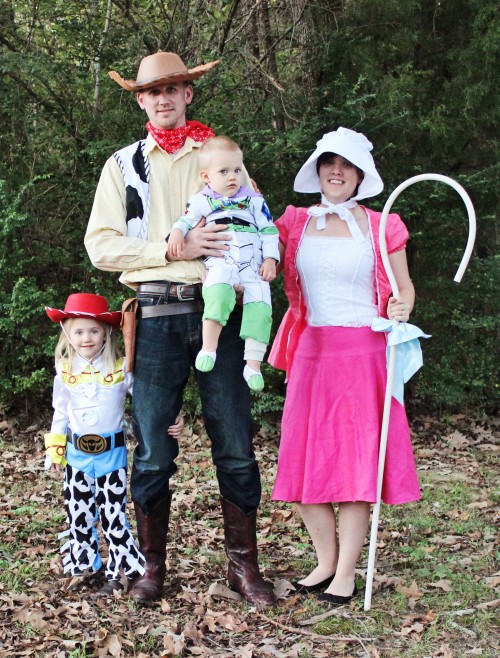 My costume got a little tricky and it still isn’t complete. If only Sweet T was willing to be Bo Peep! You see they make a little girl’s Toy Story Bo Peep costume that would have been perfect, but Sweet T will be Jessie or she will be nothing so…. 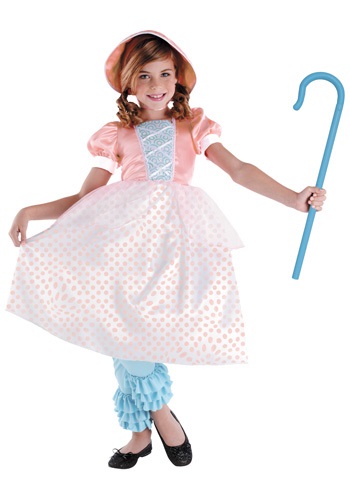 Mama’s got to figure out how to make a Bo Peep costume for adults. Most of what is out there is either a $100+ cosplay creation or a sexy Bo Peep which just isn’t for me.

And I’m thinking of cutting out some white felt polka dots to glue on the skirt.

Since Toy Story 4 has come out, Bo Peeps look has changed up a bit and there are more Bo Peep Halloween costume options out there for adults. You might want to just buy this one and be done with it! 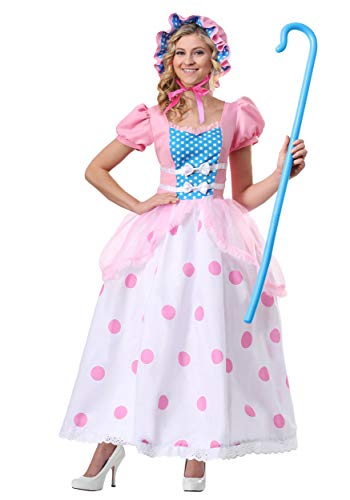 Hubs is looking so good as Sheriff Woody that I may have to get someone else to watch the sheep tonight! 😉

What are you dressing up as this year?

Check out this easy DIY Kristoff costume too or my easy kakamora costume if you’re doing a Moana theme.