The great thing about this tomato dish (besides the hearty flavor) is the convenience. Stewed tomatoes can cook for as little as 15 minutes or as long as several hours making them easy to bring hot to the table at the same time as the rest of your dishes.

This is another of my Aunt Katy’s favorite recipes passed down from generations before her. She’s been making Southern stewed tomatoes longer than I’ve been alive and we had the privilege of enjoying this treat over Labor Day. Now you can too!

When I was a child, my grandfather would make this family recipe for stewed tomatoes with bread. He used ripe tomatoes from his garden when tomatoes were in season to create the most authentic taste possible but if you don’t have access to garden tomatoes right now, you can absolutely use canned tomatoes instead.

Like most Southern recipes, stewed tomatoes are simple and cheap to make. There’s no need to complicate or overthink this recipe. However, here are a few recommendations if you want them to taste “like mama used to make.”

To get that traditional, Southern flavor just right be sure to cook stewed tomatoes in a cast-iron, well-seasoned Dutch oven. Stewing the tomatoes in a Crueset isn’t going to ruin them but they’ll taste best in a good old-fashioned dutch oven like this one from Lodge.

Having well-seasoned cast iron is key here since you’ll be simmering acidic food. You don’t want a metallic taste to leech into your recipe during the cooking process.

Seasoning your cast-iron cookware prevents this. Plus, as an added bonus, cooking with cast iron (especially foods high in citric acid and vitamin C like tomatoes) creates an easy source of iron for your diet.

If you purchase a pre-seasoned iron skillet, some of the work will be done for you but you’ll still need to season it on your own before using it. A pre-seasoned skillet just gives you a bit of a jump start.

If you’ve ever cooked with heirloom cast iron you know that there’s nothing like cooking with a pan that’s been used and seasoned consistently over the course of years, decades, or even centuries. I have a 100-year-old cast-iron skillet that’s been passed down in my family and nothing will stick to that thing! It’s amazing.

Whether you’re making stewed tomatoes with garden-fresh produce in cast iron that’s been seasoned for decades or an enameled pot from Williams Sonoma with store-bought tomatoes you will love this Southern Stewed Tomatoes Recipe!

1. Melt butter in a large iron skillet or Dutch oven. Add onions and saute for 2-3 minutes on medium heat.

2. Add bacon pieces and saute until onions are translucent.

3. Add tomatoes and season with salt and black pepper to taste.

4. Cover and cook over low heat for at least 15 minutes.

🍽️ How to Serve Stewed Tomatoes

Enjoy your stewed tomatoes as a dinner side dish and serve them up with other traditional Southern favorites like fried cabbage or skillet cornbread.

Crock Pot Chicken and Dumplings is a perfect recipe for your main dish.

Can stewed tomatoes be frozen?

Yes! Stewed tomatoes are freezer safe. They freeze quite well for up to 3 months. You can either freeze stewed tomatoes in a mason jar with a lid (or an airtight container of your choice) or freeze them flat in freezer storage bags and stack them in your freezer.

This stewed tomatoes recipe is not gluten-free due to using toasted bread for texture. You can try using gluten-free bread instead of regular but may need to adjust the amount you use.

How do I thicken gluten-free tomatoes?

If your stewed tomato texture is too thin, you need to stew them longer in order to remove more moisture. If you’ve stewed them down, allowed them to cool slightly, and they are still too thin, you can thicken them with cornstarch. 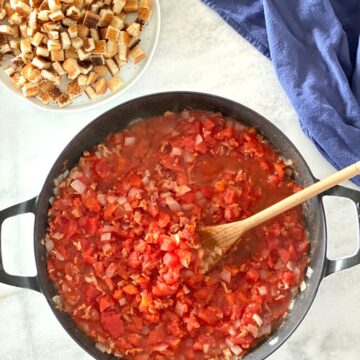 Jenn
Stewed tomatoes can cook for as little as 15 minutes or as long as several hours making them easy to bring hot to the table at the same time as the rest of your dishes.
4.80 from 10 votes
Print Recipe Pin Recipe
Prep Time 10 mins
Cook Time 15 mins
Total Time 25 mins
Course Side Dishes
Cuisine Southern
Servings 6
Calories 151 kcal