You can make these easy pickled peppers without the use of a pressure canner. Peppers are one of the easiest vegetables to can which makes them a great choice for beginners to try.

I always thought home canning was a time-consuming process that required special equipment, time, and patience in spades. This is the case for many foods, but not for jalapenos or banana peppers.

I had no idea it was this easy to pickle peppers until my dad enlightened me with this pickled pepper recipe. This is the way he cans jalapeno peppers, the way his dad (aka “Pa” when I was a child) pickled peppers, and the way I do it now too.

Maybe Sweet T will use this pickled peppers recipe one day and we’ll be four generations strong!

Quantities and jar sizes will depend on how many peppers you have. I used two-quart jars and two-pint jars. You can use seasonings to taste, just make sure to use a 50/50 ratio of vinegar/water mix.

This process will be much easier if you have a dishwasher. Run the jars and lids through a cycle so they are very hot.

If you don’t have a dishwasher then get ready to boil some water! You need piping hot jars to fill and piping hot lids to top them with.

Since you aren’t pressure canning or using a hot water bath method, it will take a little while for the seals to “pop.”  The lids seal in place as the jar cools so it usually 3-4 hours and sometimes overnight.

If you don’t pack the jar tight enough, the peppers will float as shown in the picture below once the vinegar mix is poured on them. Made that mistake the first time around!

Here’s what a properly packed jar looks like after the vinegar mix has been poured.

If by morning, you have no seal it’s probably because the lids weren’t hot enough. You can repeat the process over again (it won’t harm the peppers) or just stick the unsealed jars in your fridge. They will last in the refrigerator for 2-3 months like that as long as the vinegar brine is covering the peppers.

What is the shelf life of pickled peppers?

This is not an FDA-approved method and I can’t give you an exact shelf life for your peppers. Use your common sense here. Vinegar and Mason jars do a great job at preserving, but if your pickled peppers become discolored or foul-smelling, please don’t eat them!
That being said, ours generally last for 2 years in the pantry.

Can I use a variety of peppers?

Yes! Banana, jalapeno, and pepperoncini peppers are all good choices. Mini or regular bell peppers will work with this method but you must deseed and slice them first rather than canning them whole.

How many pickled peppers are in a peck?

This one is just for fun because I know you can’t think about pickling peppers without wondering! A peck is approximately 2.3 gallons of peppers.

A pint-sized jar of pickled peppers makes an especially thoughtful gift, particularly for Christmas since they are naturally festive colors. I wrapped some ribbon around the neck of one of mine to give my neighbor for her birthday.

Creamy cucumber salad can be served as a side dish or scooped up with tortilla chips for a delicious appetizer.

Learn how to store your yellow summer squash in the freezer with this simple technique. 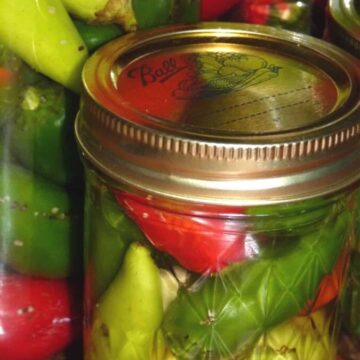 *Quantities and jar sizes will depend on how many peppers you have. I used two-quart jars and two-pint jars. You can use seasonings to taste, just make sure to use a 50/50 ratio of vinegar/water mix
Keyword canning, food storage, gardening, pickled peppers, pickling
Did You Make This Recipe?Please leave a comment below or share on Pinterest

The web story version of this pickled peppers recipe can be found by clicking the link.